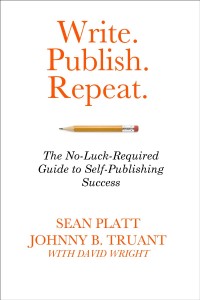 I’m going to let you into a secret. I want to write a novel. I’ve got an idea for it and everything. If I tell it well I think you’ll really like it.

So I’m currently exploring all sorts of stuff on writing.

After all, I’m a songwriter. So I can tell a story in 3 minutes. Telling one in a few hundred pages seems a far bigger task.

The most inspiring book I’ve (nearly) read is by two indie fiction writers who make their living selling ebooks on Kindle. They’re names are Sean Platt and Johnny B Truant and the book is called Write Publish Repeat.

They’re real writers, and by that I mean that they create prolifically.

You’ll recall my post from earlier in the week where I said to cut the bullshit and create? Well these guys do exactly that, and I admire them for it.

Yet because they’re indie fiction writers and I’m an indie songwriter, I realised that the parallels between their landscape and mine are really similar.

We are both in a new world where we have direct access to our supporters, and don’t need to have the approval of a record company or book publisher to have the right to be heard or read.

We can just do it ourselves.

For all the worrisome words coming from some artists about the death of the music industry, I take the opposite view. I think this is the easiest time to be a creating musician that there has ever been. Hell, I can write a song in the morning and have a professional sounding recording in front of you by tea time.

So, while I started reading it for tips on how to succeed in the world of indie fiction writing, I found myself applying all of what they said to my life as an indie musician.

One chapter in particular caught my eye. It’s entitled The List of Myths. So I’ve taken their chapter’s list of myths about the fiction world, and created my own list of related myths about the music industry.

Myth 1: If you go indie, you can’t get signed by a record company.

This is nonsense. I’ve argued this before in my blog post 10 Reasons Why Being Your Own Record Label Is A No Brainer.

Your own record is a great way to prove that you are a good business case to a label. Do you really think that someone who self releases and makes thousands of sales will be ignored by the record industry?

Who do you think they’d rather sign? The band who couldn’t be bothered to get their music out there and build relationships with fans? The ones who stayed in their bedroom playing to themselves?

Myth 2: Self release is what you do when you can’t get a label

Well go tell that one to Marillion. They got rid of their record company and do it themselves now. Could they get a deal? Of course they could. But they choose to self release instead.

Self release is an option for any artist, big or small, and increasingly big name artists are going direct to their fans too.

Why? Because when you self release you get control over EVERYTHING. I just gave my live album away to my supporters for free. You think a label would let me do that?

I get to choose the price, special offers, the design, the content, what I write and sing about, and I can experiment in whichever way I fancy. And I get direct contact with you instead of having an industry schmuck getting in between us. What artist wouldn’t want that?

Myth 3: The music industry can do things for you that you can’t do for yourself

To (almost) quote Johnny and Sean: “Okay, there’s technically some truth to this one, but only a little, and it’s irrelevant for most musicians.”

If you’re Dylan, this is true. The industry can get your record in all sorts of places that my record could never get to, and make all the dull connections that managing sales of that sort wouldn’t be fun to handle yourself. They can do scale really well.

So that’s if you’re Dylan. But if you’re me, or you? No chance. You’ll be the tiniest fish in the food chain. I know, I’ve been there.

My album We Can Make The World Stop got a national distribution deal. Woohoo! Music industry credibility!!

Everyone has only a limited amount of time and resources. Do you really think you’ll be their priority? Can you blame them?

Yet when you self release, you are your label’s number one priority!! And believe me, the time and passion you put behind your album will be much, much more than the industry will give it.

Myth 4: Listeners care if your album is self released

No they don’t. Listeners care if your songs are crap, if you can’t sing, or if your production quality is awful.

They care if your music is dull, if you have no passion, if your cover artwork is amateurish.

There is no reason at all why independent musicians can’t produce a product that matches any commercial release.

Look at the production on When The Sunlight Shines. Hold it in your hand and feel it. It’s beautiful. And it’s indie.

In fact, your indie status is actually cool. Think about it. You’re a musician aren’t you. You have something to say about the world. You have your own path and you don’t follow the usual rules.

What makes you think that sucking the teat of a multinational corporation fits with that? Why would listeners say “I’m not listening to his music, he’s not got the blessing of a corporate middle manager.”

No. If you give them a good product, they’ll just as likely appreciate your indie stance. They’ll respect that you’re doing it your own way.

You’re an artist. That’s what they want you to do. It’s not a negative. It’s a plus.

Myth 5: Self releases are a lottery

If you’re thinking of being the next superstar, yeah you’re right. The whole industry is a lottery.

At one time I was running 82 music nights a year in this city. I was dealing with about 200 acts a year.

For those 3 years I heard everyone there was to hear, and I booked the best of them.

You know what I often think when I listen to people who’ve made it big? I compare them to a Liverpool act I’ve booked and wonder how it wasn’t them! The difference in talent? None that I can put my finger on.

Some make it big. Some don’t. Hey ho.

So yeah, the whole industry is a lottery.

But that depends what your goal is. If your goal is to make music your life and your living, the lottery idea is what Johnny and Sean call “one book thinking.”

Their mantra is to Write Publish and Repeat. My mantra to you (and to me) is Write Record Release and Repeat.

As they say in their book “To the gamblers: You don’t NEED to have that one in a million hit – because you can keep writing.”

They have about 40 books out. So they don’t need to have that one big hit. Each of the 40 contribute something to their income. They did this in a couple of years. How many albums have you got?

In the music world, check out the amount of stuff that Jonathan Coulton has churned out in a short space of time.

He now makes his living from being a musician, just as Sean and Johnny (and their colleague Dave) make theirs from fiction.

Me? I’ve got 3 full studio albums, 1 live album, and an EP. In 8 years. Doesn’t match up does it. Not writing and recording enough am I?

I was so inspired by Sean and Johnny’s book that I wrote to them. I wanted to know what he would be doing if he was an indie songwriter rather than an indie fiction writer.
Sean wrote back the same day. So I’ll leave you with his advice on that. And I’ll urge you one more time to buy their book, whatever kind of artist you are.  You’ll learn tons!
My Question to Sean:
If books and stories were abolished, and you were only allowed to write songs, not books – how would you approach the task of being an indie songwriter given the lessons from your career as an indie book writer?
Sean’s Reply:
I’m not sure how to quickly answer that question, as there are countless variables and such, but essentially I wouldn’t really do anything differently in concept.
I’d get as many free songs out there as possible using free broadcast means, then move a percentage of listeners from the freebie songs to a full paid album.
I love what Walk Off the Earth does. They are a great example. I love their free stuff, I always check out their stuff on YouTube, but I love them so much I’m always happy to buy an album, too.