A Killer Tip For Working Smarter And Setting Yourself Free 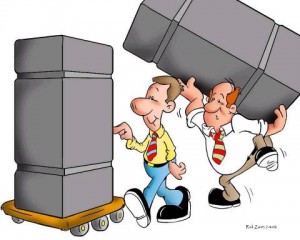 People often say to me that they’re amazed at how much I get done. I’m always busy, always up to some project or other. What they don’t know is that I use a collection of hacks and techniques for working smart. It means I can get loads done in super fast time.

From my experience of running festivals, creating football clubs, and managing major arts projects, I’ve learned a way of working that allows me to stay stress free while getting everything done.

It’s generally thought that the only way to get loads done is to get stressed and burn out. I know another way. I want to share an aspect of it with you.

I learned some years ago that the world is skewed. We’re raised to say that if we put 10% more effort in, that we’ll get 10% more results out. But that’s not how things really work.

Some things that we do have big results. Other things we do just waste our time.

I view my work from that perspective and so I’m constantly on the lookout for those vital few things that really make a difference.

As a rule of thumb, only 20% of what we do will bring us the vast majority of our results.

Which 20% of foods are responsible for the bulk of your calories?

Which 20% of your customers bring you most of your sales?

Which 20% of the people you know bring you most of your headaches?

I know that the bulk of my work is done with 20% of my time, so I arrange my work flow accordingly. Potentially, it means I can get 5 times more done than I would from working normally.

Here’s how I do it. I use the Journalism Principle.

I assume that at any point, my time on the project could run out. As if a buzzer went off and I was forced to stop.

In fact, this is exactly how it used to be for old-time journalists phoning in their reports on unreliable phone networks. At any point, their phone could go dead.

This is how I work too. And at every milestone I’ll ask “is this now good enough? Can I now stop work on this and do something more productive?”

So let’s use a recording session as an example.

I’ll start with guitar and vocals. If the project suddenly stops then I’ve got a usable track.

If I had started with guitar and lead guitar, then if the project stops I’ve not got a useable track, I’ve only got an instrumental.

The fact is that life throws plenty of curveballs at us, especially when we are managing projects. By working to an imaginary buzzer, it forces me to focus on the truly important stuff first.

And by doing that, I often find I’m able to stop sooner than I thought because it’s already good enough.

I can ask myself what is more important, the next part of the project or spending four times the time on tweaks and twiddles.

By knowing that just a few parts of any job bring the bulk of my results, I have developed a way of working that means I can get four times more done than the old me ever could.

Or perhaps only twice as much – but with more time for play!