A Tribute To Malcolm Pinnegar of The Dirty Thirty 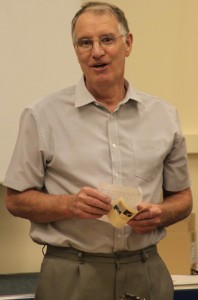 I wake this morning to the heartbreaking news that Malcolm Pinnegar (“Benny to his friends”) passed away last night after a long illness.

Benny led The Dirty Thirty group of striking miners in Leicestershire during the Miners Strike of 84/85.

The remaining 2,500 Leicestershire miners broke the national strike and continued to work.

Benny and The Dirty Thirty stood apart from their own community to do what they believed was right.

Having penned the song “The Dirty Thirty” I was asked to perform it. It will forever live in the memory as one of my proudest gigs.

Meeting Benny himself was a genuine honour. I was sat only four seats from him. The woman sat next to me said: “That’s Benny, have you said hello?”

I knew it was but I hadn’t. I felt somewhat in awe of him and as much as I wanted to talk to him I also felt restrained from just walking up to him and saying hi.

After all, Malcolm Pinnegar will forever be remembered as one of the heroes of the Miners’ Strike. I’m just some bloke who sings songs.

I’ll always remember the look on Malcolm’s face as, from the stage, I looked straight at him to deliver the line “So here’s to Malcolm Pinnegar, or Benny to his friends, who led the Dirty Thirty til the strike came to an end.”

I was rewarded with a big Benny smile.

Happily, I did meet him despite my own shyness, and I am deeply, deeply privileged to have done so.

He was a man of great modesty, humanity and substance. I could instantly see why The Dirty Thirty trusted him as they did.

And more than that – a man of fairness and, yes, humility too.

When I first wrote the song The Dirty Thirty, I posted the lyrics off to David Bell, whose book on the subject first inspired me.

The chorus contained the line: “And if you call them heroes they would humbly disagree.”

It was too cap-doffing for who they are, he felt, and he was right. I changed it to “surely disagree” and the song paints a better picture of them as a result.

But despite that, I saw in person that there really was a great humility in Benny and his colleagues.

Not a humility that defers to another’s supposed superiority, but the sort of humility that is the very best of working class values.

The one that stands up for itself with a robust: “You’re no better than us.”

Yet just as strongly states “And I’m no better than you neither.”

He spoke at the commemoration event. His message was a simple and straightforward one, based on fairness and honesty.

“Politicians”, he said simply, “need to do things cos thee fair, not because it gets them elected.”

Benny didn’t see himself as a hero. He saw himself, like the rest of The Dirty Thirty do, as someone who simply did what was right.

But he is a hero nonetheless, and one of the finest of men.

If you don’t know the story of Malcolm and The Dirty Thirty then play the song above. I am also making it available as a free download to encourage as many people to hear about Malcolm Pinnegar’s extraordinary life as possible. Download it by right clicking here and choosing Save.