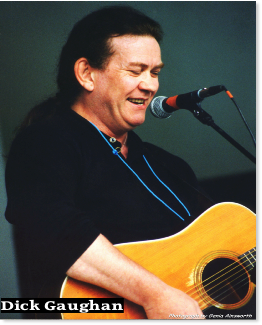 As you’ll know, I had the huge honour of supporting the legendary Dick Gaughan at Hebden Bridge Trades Club last month.

It was great to see Dick in the audience watching me play, and it was better still when we swapped roles and I watched him play!!

But in the aftermath of the gig, we received this message from him. Dick Gaughan has been one of my musical heroes for quite some time, so it means a lot:

“In dark days like these, songs like Alun’s are needed more than ever and they shine like a beacon through the fog of lies, disinformation and propaganda to present a working class view of reality. Great singer, great guitarist, great songwriter and hugely entertaining in live performance.”