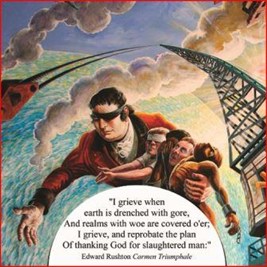 Liverpool has a sorry history in terms of its role in the horrific slave trade.

Much of Liverpool’s initial wealth was built on the profits from this trade in slavery, yet there were those at the time who argued vociferously against it.

One of these was Edward Rushton, a man who served on a slave ship, and whose experiences shaped his political outlook as well as struck him blind.

Rushton was a true radical whose role has been largely unsung.

I’ve seen the initial read through some months ago. I’m told it’s been hugely improved upon since, which is hard to imagine, because it blew my socks off when I saw it!

To whet your appetite, John Graham Davies is doing two free public talks tomorrow (Wednesday) where you can find out a lot more of the inspirational figure of Rushton.

The second is at Liverpool Central Library from 6.30 til 8pm.

A special highlight is the reading of Rushton’s electrifying letter to George Washington, condemning the President for continuing to be an owner of slaves.