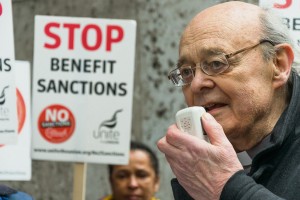 The Department of Work and Pensions has today revealed new plans to ramp up their pressure on benefit claimants by scrapping benefit sanctions.

The DWP has announced that it is currently recruiting a crack team of songwriters to pen scathing ditties about claimants instead.

A DWP spokesperson said: “Our Minister Hettie McVile got the idea after a nasty song was written about her. It created such an atmosphere of fear that we decided it would be the ideal tool to attack the poor and disabled with.”

Groups representing the disabled have responded with outrage to the announcement.

One campaigner, who preferred to stay anonymous for fear of ending up in a song herself, said:

“This is truly shocking. Losing all income for 13 weeks was bad enough. But being mocked by words set to a catchy melody is far, far worse. We are urgently lobbying the DWP to continue removing our money from us. Anything but this!”

Anti suicide campaigners are also alarmed at the proposed change.

The campaign group No More Suicides From Songs said: “Already there have been 60 to 70 suicides from benefit sanctions. This will get worse if this new measure is introduced. Starving for 3 months is a mere inconvenience compared to being the target of a satirical ballad. We are on full alert.”

The Minister was unavailable for comment today. Yet a Daily Fail editorial praised the announcement, calling it a step forward in the battle against compassion.