This report has just come through from the Labournet UK website, reproduced in full below:

Radical singer Alun Parry was on guitar as the audience queued up for Leonard Cohen outside the Liverpool Arena on Tuesday night.

“Hey Leonard hear us yell, please do not play Israel…

Hey Leonard I’m a fan, but I’m so disappointed man…

Leonard Cohen still plans to play in Tel-Aviv on 24 September, but Alun Parry, singing through a megaphone and surrounded by an impromptu chorus, banner and placards got straight through to the huge audience, many of whom did not know of Cohen’s plans. 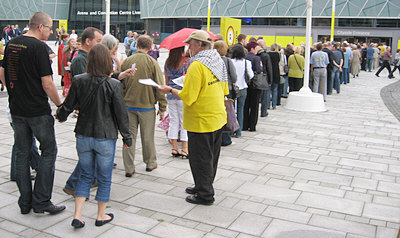 Approaching from the dock road, they had already encountered Liverpool Friends of Palestine on a megaphone with their banner “End the Siege of Gaza, No to Ethnic Cleansing, Speak out for the Palestinians”.

Walking to the Arena, the fans found another 30 activists wearing new “Boycott Israeli Goods” t-shirts and dishing out 2000 leaflets. With a few hostile exceptions, people showed they agreed, or were willing to debate it!

It’s not his fault! But he can choose not to go!

You can’t tell an artist where to play! So Picasso should have exhibited Guernica in Berlin?

Why are you picking on him? It’s not him, it’s them! The Israelis committed war crimes in Gaza. They need to get the message, boycott, divestment and sanctions…

On Monday, Halton Community Radio had interviewed Leon Rosselson in depth on Cohen, the cultural boycott, and the big question – is a gig just a gig, or do music and politics mix?

Last night on the Mersey, they mixed all right.

Do write to Cohen’s manager Robert Kory, on [email protected], to give him the news.