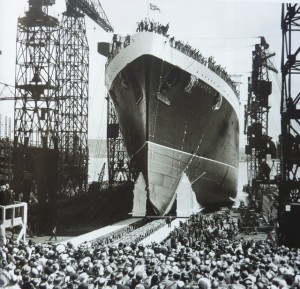 It’s Liverpool in the late 1930s. A time when the life of the city is locked to the river and the sea beyond it. When half of the menfolk are dockworkers, and the other half sailors.

A time before mobile phones would keep us in daily touch, and lovers sail away for months and months at a time. Lovers on ships leaving lovers on the riverside, waving handkerchiefs at the old Pier Head. Aching hearts torn asunder through circumstance.

A relentless decade of poverty already lived through. The Labour Government of ’45 with its welfare state and National Health Service still only a desperate hope. For now, there are just the hard choices of want.

Another great war looms, so soon after the last one.

And amidst it all, a ship sails into the distance with your whole world upon it.

On that ship, waving frantically as Liverpool edges away from him, is a man that looks uncannily like my father. He is my father’s father. And he will write aching love letters to my father’s mother, Lil.

I wrote this song for them, and in particular for Lil. Today is Valentine’s Day. It is fitting to share it today for that reason alone, as it is a song of love and heartache that was common for Liverpool lovers of the time.

But today is also the day I think of Lil. It is the anniversary of the day she passed on. I was only five years old, yet I still remember the Club Orange biscuits, the special wooden tray that she put them on, and the bedtime feasts we would share.

My father’s father died when my Dad was just eight years old. It saddens me to know that in the short time they had together, he and Lil were kept apart so much by work and wartime.

For Lil and Alexander. Here’s to you both.