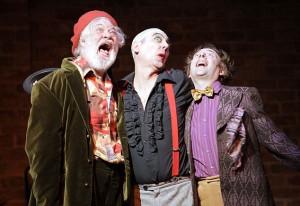 I’ve never seen Shakespeare before. Really! I’m not even messing.

I didn’t get him at school. Maybe because Shakespeare at school was getting a 14 year old shy lad to stumble through the verse.

I tried reading him myself. It still didn’t work. I confessed as much to a social enterprise leader who I was training. His mission was to take Shakespeare into schools.

He shook his head. “He’s not meant to be read, Al!” he said. “He’s meant to be heard from the mouths of skilled actors!”

It made sense. I vowed to him that I’d go and see some Shakey. But that was two years ago, maybe three.

But when the Everyman reopened with Shakespeare’s Twelfth Night, I tried to get a ticket only to find they were as precious as a European Cup semi final ticket.

I finally got one today. I turned up and found a huge queue of people. This is my Liverpool I thought. For all the stereotypes about us, here we were, a line of Scousers, desperate to get hold of a ticket to see a production of Shakespeare that has been sold out every night for over a month.

It cost me ten pounds and I was given a front row seat.

The show began at half five. They didn’t let us out until 9pm.

I thought of the match. The match is four times more expensive than this, for an unpredictable, maybe drab, 90 minutes.

Here I get three hours worth, I know it’s had fab reviews, and it’s only a quarter of the price.

And guess what else was different from the match?

There were loads of young people there. You don’t see them at the game any more. But they were here in numbers.

I couldn’t resist checking out how they were doing with Shakey throughout the show. They were loving it.

But then, so were we all.

I was laughing my head off. At Shakespeare!

See, that reads mad to me. But I was. Everyone was.

Did I understand every sentence? Course not. Did I follow the story? Absolutely.

Did every single one of us leave with a huge smile on our faces? You bet we did.

And what about our own Paul Duckworth. What a voice he’s got. I didn’t know he even sings. But, wow does he sing!

This show was fabulous. I’m glad I finally saw Shakespeare. But I really doubt anywhere would do it quite as crowd pleasingly awesome as here in Liverpool at the Everyman.

There’s something about this city. Time and again I see things here that rise to meet the brilliance of our audience, involves them, and delights them.

This, the first Everyman production since it reopened, did all of that and more.

I don’t typically do reviews. But this was a personal landmark for me. My first Shakespeare. I’m really glad I did it at The Everyman.