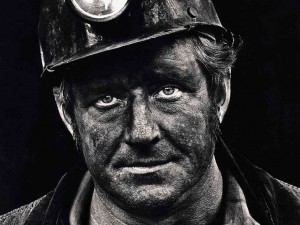 Following my recent blog post, delicately titled Cut The Bullshit and Create, I’ve been making efforts to do just that myself.

The song is inspired by a coal miner from Salford who I’ve been hearing a lot about of late. I’ve never met him, but hearing about him sparked something within me.

So I began writing this song.

There’s something about coal mining that I feel a real connection to.

It’s possibly because, for me, the Miners Strike was the key politicising event of my life.

But there’s more to it than that.

On the one hand, it’s something I’d personally dread doing. To disappear day by day for years on end into the bowels of the earth makes me feel panicky just to contemplate.

There have been a number of mining disasters here and across the world within the last few years. It is a dangerous job, and many miners have terrible tales to tell of their own.

The danger is ever present. An unexpected creak can be enough to make everyone freeze.

As such, the ordinary day for a miner is something heroic to me.

It almost feels like to be a miner is more than a profession. It feels like an identity. When someone says “I was a miner”, it carries so much more with it than a statement of occupation.

It carries with it an identity, a set of values.

When I hear of the stories of this Salford miner, and when I have spoken with other miners, or read interviews with ex-miners there are two things that have a consistent theme.

Firstly, the job was extremely tough. Long hours underneath the earth, seeing the daylight for only a few hours a week in winter, no toilet facilities, 6 foot men in five and a half foot tunnels, hot temperatures, water underfoot, heavy lifting, and hard, hard toil.

Secondly, the camaraderie of the people they worked with. When asked what was the best thing about the job, they invariably say: “the people I worked with.”

So in this song I try to capture all of that. Had I have written a song that was simply bleak, I know that the Salford miner would have protested.

When he thinks back on his life, he doesn’t see his days as a miner as something to regret, even if it has taken its physical toll.

He sees it proudly and positively, and well he should. He talks of the togetherness, the community, the belonging, the laughs, and people connected and dependent on each other in a way that few other jobs can muster.

This song isn’t a political song with a capital P. It doesn’t go into 84/5. It looks at the job itself, the experience of being a miner, inspired by the tales of this one guy, backed up by further research and musings.

But, as I often say, to put the lives of working people in the spotlight is political in itself.

Here’s a demo of the song. I hope you enjoy it. Let me know what you think in the comments below.

NOTE: As if to illustrate all of the above, the photograph I chose to accompany this post is of Lee Hipshire emerging from his shift at a pit in Logan County in 1976. Lee took early retirement shortly afterwards due to black lung disease and died at the age of 57. (Source)