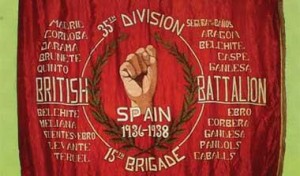 Don’t hesitate with this. It’s a newly recorded song. But it’s here for a limited time only. It’s a sneak preview of the enitire song and it will vanish at midnight. So don’t delay. Listen now or you’ll miss it.

The song is set in the midst of the Spanish Civil War. The fascist general Franco had overthrown the democratically elected government of Spain.

This is the true story of Spain’s forced adoption scandal, which continued for half a century, even until the 1980s.

The Church ran the maternity hospitals, with nuns as midwives.

Franco decided that the children of revolutionaries would be sold off to fascist families instead.

Their mothers had their newborns snatched from them and told they were dead.

The practice outlived Franco as those the Church regarded as undesirable would be lied to and have their newborn babies given to others.

They were handed mass cards, and went through fake burials, and mourned at empty graves.

Yet all the while, their children were alive elsewhere.

The song was cowritten by Gabi Monk of The Good Intentions. Gabi saw the story on a news report and it touched her deeply. She asked me if I’d join her in writing a song about it, and so we worked together to create this.

Gabi also sings on the record.