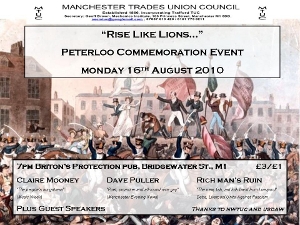 I’ll be performing with Vinnie T Spen in Manchester on Monday 16 August, running through some of the set list of our band Rich Man’s Ruin. (Gabi is on her hollybobs or else she’d be with us too).

The gig is to commemorate the events at Peterloo where working people protesting peacefully were attacked by the forces of the state. Where have we heard that story before and since!

Also performing are the ever wonderful Claire Mooney, and the outstanding Manchester poet Dave Puller.

It’s at the Briton’s Protection pub on Bridgewater Street, M1 and it’s £3 on the door (£1 concessions).

Big thanks in particular to Kate Richardson and Sara Livesy for their efforts in organising this event.