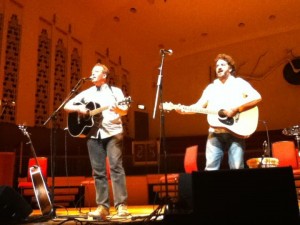 If you’ve never been before it’s the bestest thing. There’s so much weird and wonderful stuff going on as well as some great music too.

And Hope Street really does need celebrating in my view.

I started off with a full set on The Phil’s outdoor stage in Myrtle Street that was a joy to play. Thanks everyone for turning up and singing along.

Then came the biggest treat of all. After my set, I whizzed next door into the Philharmonic itself where Ian Prowse (of Amsterdam and Pele fame) had asked me to play a song with him during his set.

I’ve never played the Phil before – one of the few Liverpool venues I’ve not – so I was delighted to accept Ian’s offer.

We didn’t know what we were going to play yet of course. Ian suggested an old Billy Bragg rocking number, To Have And Have Not.

I’ve not played that since I was a stroppy teenager but there’s a compartment in my head labeled “Billy Bragg Songs”, so all I needed to do was open that and it all came flooding back.

A quick rehearsal back stage ten minutes before we went on stage and we nailed it.

The Phil itself was packed out which was brilliant. What a lovely venue it is. I always felt it would be a lovely place to settle down and play some music for people and I wasn’t wrong.

Joyous stuff. Great to have the teenage nostalgia mixed in too.

And you know what the hardest part about singing Billy’s songs is? Not drifting into a cockney accent. It took me all my Scouseness to sing in my own voice and avoid yelling “Ap in the morrrrnin an ahhht to school.”

I managed it though. A great day.

(Thanks to my namesake Sue Parry who was sat in the front row and took the snap on her phone.)