A Tribute to Pop, my Granddad 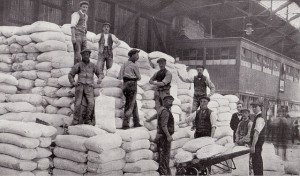 I always thought that Pop knew the bus drivers.

Mum and I would be sat at the Walton depot on the number 46 bus, and Pop would be sat with us, chatting away carefree, as the driver got on and revved up the engine.

Pop waves her away. “No it’s alright girl” he says and continues to chat in the most relaxed of fashions.

Mum would be panicking at this point. Not me. I was a young child, and I’d already figured out what happens next and just thought it was normal.

After all, Pop knew the bus drivers didn’t he. After all, he was Pop.

The bus driver would check his mirrors, indicate, and drive off.

It was only then that Pop would rise to his feet, run down the aisle of the bus, and yell something like “ee’y’are driver.”

The stunned driver would then stop the bus and Pop would leap off quite happily like it was the most normal thing on earth.

But it turns out Pop didn’t know the drivers at all. It was just Pop being Pop.

In The Casa bar on Hope Street, there is a photograph of Liverpool dockers in the docks canteen from years back, and another showing them stood out in the elements, presumably waiting for work.

I always look for Pop in them. It’s impossible to see them and not see something of Pop.

A Liverpool docker all his life, he wore the dockers uniform even after retirement. The long coat down to his knees, the scarf, the flat cap, and the folded newspaper tucked under his arm.

To be a docker in those times was a gruelling and often filthy job. The waterfront exaggerates the mildest of weathers. Walk by the river on a day that is merely inclement and you find yourself at the mercy of the coldest of winds.

This was Pop’s workplace at all hours, in the days when Liverpool was the most important port in the land.

The Czech writer Karel Capek describes the reality of those days in this busiest of ports:

“Yellow water, bellowing steam ferries, white trans-atlantic liners, towers, cranes, stevedores, skiffs, shipyards, trains, smoke, chaos, hooting, ringing, hammering, puffing, the ruptured bellies of the ships, the stench of horses, the sweat, urine, and waste from all the continents of the world … And if I heaped up words for another half an hour, I wouldn’t achieve the full number, confusion and expanse which is called Liverpool.”

And in the midst of this stench and confusion, there was Pop.

People remember him for his kindness and his straight talking, honest to the core in all senses of the word. A musician and a teetotal, he would play piano in the local pub, being paid in alcohol that his pal would drink.

He had an electric organ in his front parlour that he would sit at and play in the dark. This was likely the very first musical instrument I ever set hands on. One can only guess what subtle influence this might have had.

He was the kind of man who said what he thought, and stories abound of this special kind of integrity.

When the local priest visited one day, he saw some money on the mantelpiece and eagerly swiped it for the church. “Ah good, I’ll have that” said the priest, sweeping it into his hands.

The priest’s authority was unquestioned in these times, and many a family would have gone hungry before challenging him.

“No you friggin’ won’t” he said, took back his money, and promptly marched the priest out of the house, never to be seen again.

Pop was born a Catholic but eschewed religion. In a city that suffered horribly from religious sectarianism, I wonder what kind of stir it must have caused when in 1940 he married his sweetheart Mary McIntyre, who was C of E.

But again, that was Pop. He knew his own mind and that was that. He was a respecter only of things that he felt deserved his respect, and he was no fan of hypocrisy just to fit in with social niceties.

For me, as a child though, I remember someone who was thin of frame yet solid of character.  I remember his beautiful hands when his fingers became the passenger striding towards my toy bus. I remember pink and white marshmallows which he used to love. I remember that his laughs were low on noise and high on non verbals, his head thrown back, his eyes chuckling. I remember him stood in the kitchen doorway putting on that dockers uniform.

There are many tributes one can say about a man like Pop. There are so many stories that make me laugh and make me proud about who he was. But they are the tales of adults who saw him through an adult’s eyes.

I was only 8 when Pop passed on. It is only now that I realise how young he was to go at 64.

He would have been 100 years old today.

Children, I think, see the world in a simple way that has a certain truth and  purity and wisdom.

So my tribute is from the me that was 4 years old and playing buses with him on a tin tray table, or as a 5 year old telling him a joke and watching him laugh, or the 6 year old excitedly walking with him to the Walton bus depot where he didn’t actually know any of the drivers.

And I just remember that I adored him.