Presentation of Hillsborough Cheque to the HJC 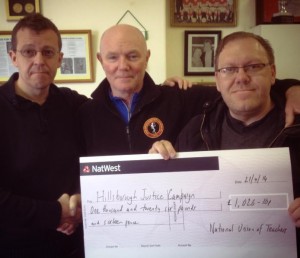 I spent this afternoon with my friend Gary Kaye, the Leeds based singer, in a visit to the Hillsborough Justice Campaign shop opposite the Anfield ground.

The purpose of our visit was to present a cheque to the HJC from our recent benefit gig at the Casa which featured me, Gary, and Tracey Curtis. We raised over £1,000.

We spent over an hour with an Evertonian who lost his brother, and a woman who lost her husband. Both men were 38 when they lost their lives at Hillsborough.

During our conversation, they each recounted their stories of that day and the days afterwards.

The thing that struck me most is that while the news media now belatedly focus on the big injustices, the cover ups, the lies, the negligence – there are hundreds of beat by beat stories from loved ones that contain a multitude of contempts and injustices in the hours and days after the disaster.

The moments that could and should have happened with empathy and care for people whose worlds had imploded, but who were instead treated so differently.

Like the lack of basic human understanding for a fine man who was told he was not allowed to kiss his brother goodbye because he was now “the property of South Yorkshire police.”

The same man who drove all the way to Sheffield in search of news only for a police officer to tell him “fuck off” when he arrived.

All on the day of a tragedy that stole the lives of 96 good people, and tore the heart out of 96 families.

The story in the news is never the full story. The full story is the beat by beat moments from each and every loved one as they came to learn the horror of what happened that day. The moments of dread, fear, hope that all was in fact well, and then the often callously delivered news that it was not.

Never did that feel truer than in the stories that were shared with me today. Justice.