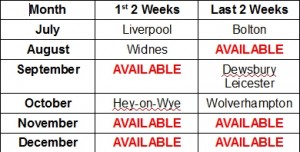 It’s been a great year so far and I want to finish on a high.

So get in touch for your house gig, concert, benefit, union gig, folk club or festival.

I’ll even give you some advice for putting on your own gig.

It only needs 30 people for it to be a lot of fun.

Contact me now to get one of these final 4 dates for this year.

I’m also booking for 2015, so get ahead of the crowd and get in touch now.