Spot The Odd One Out

I’m sure we’ll hear lots about the evil union from the press and the meejah.

There’ll almost certainly be some very personalised attacks on the likes of Billy Hayes (a fellow Liverpool lad) who heads up the union. After all, that’s how these things work. So don’t fall for it.

We’ll probably hear how this “dinosaur” of a union is holding the entire nation to ransom.

But here’s a little game for everyone to play. It’s called Spot The Odd One Out. 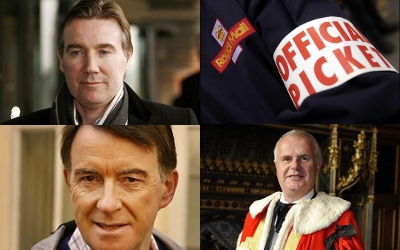 Above are Adam Crozier, Chief Executive of the Royal Mail. Then to his right is the Postal Strike. Then beneath that is City Minister and former banker Lord Myners who has this week been moaning at the postal workers. And of course Lord Mandelson who has given the postal workers many a ticking off of late.

But which is the odd one out?

It may well be true that we plumped in favour of elected rule a couple of hundred years ago during the Enlightenment.

Yet that silly old strike is the only thing in our little group that was actually voted on.

Myners is an ex banker who was voted in by nobody yet sits in the House of Lords, serves as a minister in the government, and uses his unelected position to lecture postal workers.

Mandelson was twice forced to resign from front line politics in disgrace. But now he is a back – as a Lord.

And so, like Myners and Crozier, was voted in by nobody.

Yet somehow it is okay for him to hold the exalted role of President of the Board of Trade in the Cabinet, with not a single vote having put him there.

And that gives him the right to tut tut at postal workers so desperate to improve their working conditions and the service they offer to their customers that they’ll strike to do it.

Trust those crusty old unions with their stodgy old democracy.

If Mandelson, Myners and Crozier were Arthur Scargill, everyone would be howling for a ballot.

How about we have one to get rid of these unelected throwbacks and put the people back in charge?