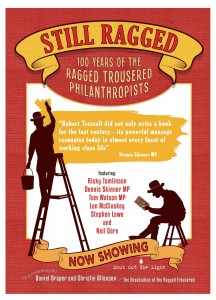 The gang at Shut Out The Light films have produced a star studded cast for this film celebrating 100 years since the publication of The Ragged Trousered Philanthropists.

The book was my bible when I was a 13 year old and I’ve read it a few times since. It’s also been the inspiration behind many of my songs.

In fact, I even did a full scale radio ballad Tressell And Me which you can hear by clicking this link.

The film features the likes of Len McCluskey, Dennis Skinner, Tom Watson and Ricky Tomlinson and, if I didn’t end up on the cutting room floor (which is a distinct possibility) me!

See the trailer for the film here. You’ll spot my song Letter To Kathleen in the background, which was based on Tressell’s final letter home to his daughter before he died here in Liverpool.