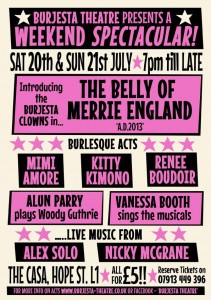 Follow them as they forlornly search through a British society in conflict and opt for ‘money hanging from the trees’.

See them arrive in London expecting ‘streets paved with gold’ only to witness Thatcher’s funeral and a final bizarre showdown with the bankers of the City of London.

But it’s not just a play, it’s also a variety spectacular, and I’ll be closing the night with a selection of songs from Woody Guthrie’s songbook.

I’m told that tickets for Saturday are nearly sold out so hurry hurry.