The Lesson of the Out of Control Bus! 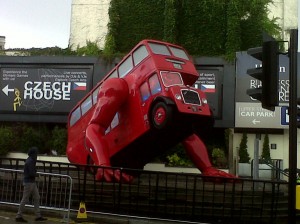 That was me on the bus yesterday evening.

Earlier, while waiting for it, I was saying “be the bus, be the bus” every time I saw headlights emerge in the darkness from around the corner.

The bus had been late, and so I was worried I would miss my connection for my next bus.

I had the sat nav on my phone switched on so I could estimate whether I’d make it on time.

I was cutting it fine. It seemed to depend on nobody waiting at bus stops. A car would make the connection according to the sat nav. But cars don’t stop at bus stops.

The bus hurtled past an empty bus stop. Yes!

It approached the next bus stop. “Keep going keep going” I willed. The bus stopped. People got on the bus. “Hurry, hurry” I repeated at them in my head, my body tense.

I mean really! People at a bus stop, stopping the bus. The bus moves off, only to get stuck at traffic lights.

Every sinew in my body is strained. Every thought in my head is focused. Every ounce of my energy is channelled. All to the cause of getting my bus to my destination on time.

All this effort, all this will, and all this energy – devoted to something utterly out of my control. The bus had it’s own agenda, and none of my thoughts or tight sinews had the slightest impact on it. And yet I urged and willed it nonetheless. Strange really!

Thankfully I did catch my connecting bus with a minute to spare. But I would have caught it whether I willed it or not. I just wouldn’t have spent so much of myself in the process.

I suppose that sometimes, it’s worth just giving up the pretence of control and simply letting the outcome happen.