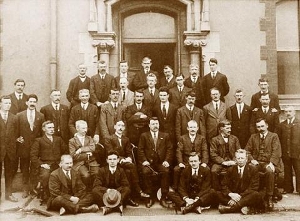 I’m delighted that my song The Limerick Soviet will be part of the forthcoming anti Austerity march in Limerick, as well as at the Limerick City Gallery of Art exhibition on workers resistance on the 9th February.

This from Mike McNamara, the President of the Limerick Council of Trade Unions:

“Limerick Council of Trade Unions, in conjunction with the Irish Congress of Trade Unions is holding an anti-Austerity march in Limerick on Saturday 9th February 2013. The Limerick City Gallery of Art is also hosting an exhibition exploring industrial disputes and workers resistance including the occurrence of Limerick’s extraordinary SOVIET, with material from Limerick City Museum, exploring the strike protest that existed in Limerick and ‘excited world attention’ in April 1919. We would be honoured if we could play your song “The Limerick Soviet” during these events and accordingly we request your kind permission to do so.”

Too right you can play it. I’m delighted!

Click here to hear the song and read the lyrics, and some more information about this incredible moment of Irish history.