What’s A Micro Gig? And Why Am I Doing Lots On My Tour 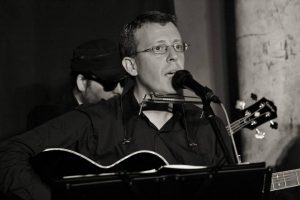 I went to a stadium gig once. I hated it. What was the point? I could only see the act through a TV screen. It was no better than watching a DVD. But maybe that’s just me. Maybe I’m just a miserable sod.

But then I read an interview with one of George Michael’s band. It seems it was much the same from his point of view too. He described how he’d glaze over during shows.

Then he contrasted it with the shows that George would put on in a social club for the nurses who had helped his Mum. They were alive and connected.

He could see everyone in the room, he said.

For me, shows are about connection. I’m not sure I’d enjoy playing big cavernous stadiums either. I like gigs where the act and the audience have a connection. I like that as a punter and as an artist.

So I’ve come up with an antidote to huge, soulless stadium gigs. I’m calling them micro gigs, which is probably a really stupid name.

But here’s what they are. Instead of trying for the biggest audience possible, I’ll be doing it to the smallest crowd possible. I’ll be putting a limit so that no more than 15 people are in the room.

Just me and you. Like I’ve showed up in your living room.

I’ll be doing a full two hour show (with interval), followed by a Q&A afterwards.

I’m adding dates all the time for this Spring’s Freedom Rider album tour. Check to see if I’m near you by clicking here – the ones marked Micro Gigs are 15 capacity.