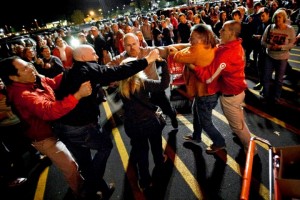 Here’s something you can get involved in so read it through to the end. It could be amazing if we did this.

You see, it’s been horrible watching the scenes from Black Friday coming in from social media. Ordinary people battering hell out of each other for the few crumbs scattered down from the rich man’s table. All kept deliberately scarce of course.

After saying that, I’m not going to be sneering about it. If you’ve got sod all, then it’s understandable that people go a bit crazy when finally something is available much cheaper.

It’s the opposite of what those of us on the Left want to spread isn’t it.

We want to spread love, peace, cooperation and community.

It seems the bosses know how to spread the worst of their values amongst us with tricks like Black Friday.

So let’s respond and spread togetherness and community instead!

Instead of their aggression and individualism, what can we do to bring people together to enjoy ourselves and each other?

After all, isn’t that what loads of us do lots of anyhow. So couldn’t we channel that so that we built an alternative to their Black Friday?

Let’s create our own RED Friday Weekend where we counter the aggressive individualism of Black Friday.

A concerted coming together of all of us folk who spread the good stuff, doing something that enables more of that good stuff to be shared.

So, I’m going to start in my own small way. And I’m laying down the invitation for you to make an offer yourself too!

The way I spread good stuff is through the communal cuddle of an intimate gig.

So instead of slashing prices on plasma TV’s where there’s not enough to go around so it causes people to grab and hit each other – I’ll slash the price of me singing for you, so you can more easily afford to sort out a gathering where people spend time together and have a sing song.

So as the first offer of this newly established RED FRIDAY WEEKEND, instead of costing my normal price of £350, I’ll sing for you for just £150. Click here to do it!

I don’t care about the venue. £150 quid is 15 mates paying a tenner each. So it’s really doable. Or your union branch sorting out something. Hell, I’ll do it in your living room for that matter. Or wherever you like.

But let’s do it. Let’s use this day – no, this whole weekend – to spread anything that brings people together and promotes OUR values, not theirs.

What can you do to put something out there this weekend that will help spread love, togetherness and community that little bit further?

I can’t wait to hear your ideas!! Let’s build something different!