Which Side Are You On Revisited

I watched Ken Loach’s excellent film about The Miner’s Strike, “Which Side Are You On”, the other night.

I was in my early teens when the Miner’s Strike was taking place.

Loach’s film revisited the extremities of police violence against ordinary people. It showed Thatcher talking about the rule of the mob never overcoming the rule of law.

Yet we saw a mob in blue who were completely above the law. When workers decide to stand up for ourselves, the full force of the State is against us.

It had happened to Des Warren and Ricky Tomlinson and the rest of the Shrewsbury Pickets 11 years earlier.

It’s hard to compare the ferment of the mid 80s with now. The defeat of the miners has changed everything and we are still suffering the effects of that defeat.

Yet the brutality of the State against legitimate protest is still with us.

One can only imagine what they would do if we posed a challenge now as big as the Miner’s did in the mid 80s, given that their response to mild challenges is so disproportionate.

Ian Tomlinson was murdered by the police for being at a demonstration. Only for the public videoing the police officers (a criminal offence now by the way!) we would never have got the truth, for they lied and blamed the victim, just as they did at Hillsborough.

The Guardian yesterday published a shocking video of what happened to two women who merely asked a police officer for his number – something they are required by law to show to the public but often don’t in demonstration situations.

I was once a member of the Labour Party, although I left it a few years before they came to power.

I joined it as a 16 year old because what I had witnessed during the Miner’s strike made me afraid of the sort of society and police state that Thatcher was creating, where all protest was cracked down upon with unaccountable brutality.

We have now had a Labour Government for 12 years and all my fears have come to pass under their stewardship.

Why does a Government that says it is on the left sanction this kind of policing against its citizens?

Why can someone be arrested and abused simply for asking for a police officer’s number?

Why can a citizen be arrested for reading the names of the war dead by a cenotaph?

Why are immigrants rounded on by immigration cops and forcibly deported (presumably to fascist cheers)?

Why is a man on a legitimate demonstration attacked and killed by police for walking away with his hands in his pockets?

Why is the response so vicious even when the challenge is so mild?

Watch the video and you’ll see what I’m talking about. 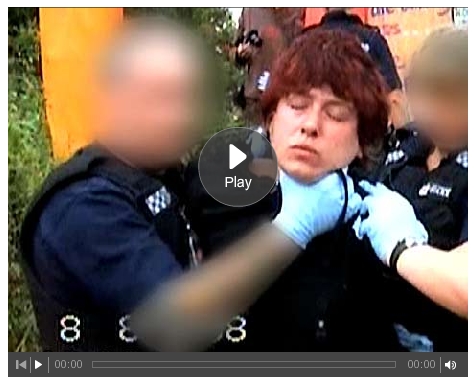