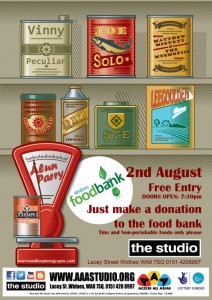 This Saturday, I will be joining forces with Joe Solo, Vinny Peculiar, and a host of other musicians to raise money for Widnes Foodbank.

What times we live in when people depend upon charity gigs to feed their children, here in the 6th richest nation on the land.

It makes me so angry when I think of it. At least this gives me some kind of opportunity to help out.

The hope is that you’ll all come along and support the event so we can raise as much money as possible. You’ll have a great night at the same time as it’s a really fabulous line up.

It’s at The Studio which is in Lacey Street, Widnes on Saturday 2nd August. The postcode is WA8 7SQ. Doors are 7.30pm and the music begins shortly after.

There’s no ticket price as such. Just come along and make a donation to the food bank while you’re there.