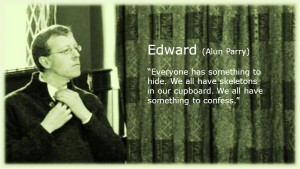 I’ll be playing the sinister role of Edward O’Brien in the dark Orwellian political thriller “Welcome To Paradise Road.”

I’ve been working hard on this along with the rest of the cast and the director. Next week, we’ll be able to let you see it.

Every wondered where we draw the line when it comes to surveillance? Or how a brutal government might use the information they keep on us? And how that plays out in the everyday, between two next door neighbours?

Are they keeping us safe? Or using fear to keep us under their thumb?

Directed by TV’s Emma Bird, it stars Emily Heyworth, Sarah Maher, and me.

The play will be performed five times, starting in a week’s time.

Opening night is at The Zanzibar on Seel Street at 9pm on Tuesday 5th April.

Then we are at Quaker’s Friends Meeting House on School Lane at 8pm on Friday 8th April.

Next we have a matinee show at Liverpool Small Cinema (in the old Magistrates Courts) on Victoria Street at 3.30pm on Saturday 9th April.

Then our second matinee, again at the Small Cinema, at 12 noon on Wednesday 13th April.

Our final performance is a double bill (with a plate of Scouse too!) at Fruit And Fibre on Norfolk Street in the Baltic Region. That starts at 7pm on Thursday 14th April.

You can pay on the door for most shows. Or you can order in advance.

Full details of dates, times, venues and how to book in advance are at http://wtpr.wordpress.com