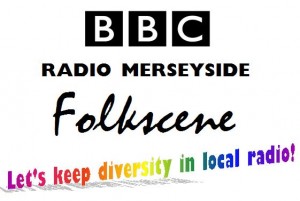 I am the subject of a 1 hour special by the BBC’s Folkscene programme this Sunday at 4pm.

The show will be broadcast on BBC Radio Merseyside, and follows a recent interview with legendary folk broadcaster Stan Ambrose.

As well as talking about my influences and what inspires my songs, the programme will focus on the new album When The Sunlight Shines, playing a range of tracks from the album.

For those in and around the Merseyside area, you can hear the show by tuning into 95.8FM.

Otherwise, you can get BBC Radio Merseyside via the internet at http://www.bbc.co.uk/radiomerseyside/on-air – or if you miss it using the BBC’s Listen Again feature.