Edinburgh – A Day To Remember

This is me last night in concert at The Wee Folk Club in Edinburgh, drawn by the lovely Mo, barmaid at The Royal Oak. Click the picture to see it in full size. It’s wonderful isn’t it, and a lovely keepsake from a fabulous day. 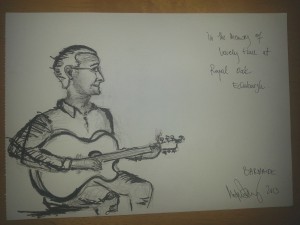 Drawn by Mojca at The Royal Oak.

On the way home, the Liverpool songwriter Eddie Cooney who made the trip with me said: “A lot of remarkable things have happened to you today.”

I asked him what they were, he listed them and I realised he was right.

My show at the folk club ended up being my third show of the day. I had stopped to watch street entertainers on two occasions during the day. Each time they pulled me out of the crowd and made me part of the show. Jan on Facebook explained this is because “you have soft lad written all over you.”

The first was a man who put on a Michael Jackson mask to sing me a love song, which he finished with a clinch and a full snog on the face! Eddie has the photos to prove it, and I’ll be putting them up soon.

This guy was juggling chainsaws!

I did actually resist him at first and said “I don’t want to” with my best frightened kid face. I imagined all sorts of catastrophes.

But I ended in the show anyhow where my job was to hold the hand of a young woman called Natalie. The handholding was to assist her as she climbed a ladder and then stood on him while he was lying on a bed of nails.

His back was full of pierced holes when he got up again. What a crazy job!

And I had the picture drawn of me!

As I was singing I saw Mo sat behind the bar drawing away, so at the interval I was fascinated to see what she was doing. Generously she gave me the drawing and wrote the lovely inscription on it too. It’s now a prized possession.

Also, the author Ian Rankin of Rebus fame, had tweeted about my gig too to all his followers. Rebus visits the Royal Oak in the books (he spots his nemesis Cafferty singing a folk song), and Ian R had spotted I was playing and encouraged his followers to get along. Nice.

On top of all that I simply had a lovely day. I awoke at 6, Eddie arrived at about 10, and we drove up together to Edinburgh, chatting all the way. Eddie get wonderfully excited at one of the roads we were driving down and got me to text his son Kit to boast about the road. Cute.

Then we had five hours in sunny Edinburgh, just sauntering, taking in the gorgeous weather, enjoying lovely company, enjoying the fabulous city, and being dragged into street theatre shows.

Eddie brought his guitar so he could legitimately put a Scotland sticker on his guitar case, and I joined him on his song Berlin which I’ve always loved. Eddie on guitar and singing, me on harmonica. I’ve never played it on harmonica before so there was the odd jazz note, but it was fun to do and the audience didn’t mind.

The gig itself was a blast. It was a lovely cosmopolitan audience. There were people from Edinburgh but also many from Germany and from Ireland, and a couple from North Carolina who had been attracted by my Woody Guthrie link. It was a lovely way to share an evening, chatting and singing to friendly people. Moira was a smiley, welcoming host, and Tom Clelland was great to chat to and he gave me two of his CDs.

Yet Liverpool is never far away. Even amongst such a disparate crowd, there was a guy from Accrington who had once lived in Roby just two minutes drive from where I lived myself until last year, and one of the German fellas had lived in Tuebrook and was an avid Liverpool supporter. I enjoyed giving him my LFC pen as a gift to take back to Germany with him.

I also ate pizza (a rare thing for me). I chose the Veggie Supreme on thin Italian crust.

I do really love Edinburgh. I find it hard to imagine living anywhere but Liverpool, such is my love for my home town and the people here. But Edinburgh is a place that I could see myself living quite happily, a thought I’ve had several times before. Who knows, if the Scots get independence then perhaps I’ll emigrate to the Scottish Socialist Republic!!

I arrived home just after 4am, unloaded my gear, and was asleep the moment my head hit the pillow. Well, I had been awake for over 22 hours.

A fabulous day in all. Thanks to Eddie for his company and for driving me there and back. And thanks to everyone in Edinburgh, and the city herself, for making it such a fabulous day. And special thanks to Mo for the drawing!

P.S. Eddie has photos and vids so when I get them I’ll post them here too.