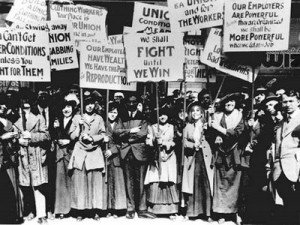 On this day, the Russian Revolution was triggered by demonstrations by women in St Petersburg. They were on strike demanding bread and peace.

They wanted an end to World War One and an end to Russian food shortages.

This song, Take The Mother’s Name, seems apt for International Women’s Day. It recalls the fact that, once upon a time, a child took the name of its mother, not its father, and how it changed.

Engels called the switch “the historic defeat of the female gender.”

The song also tells the story of the shackling of female sexuality as a result.

Take The Mother’s Name is taken from the album We Can Make The World Stop.