Shankly – The Hero Who Never Let Me Down 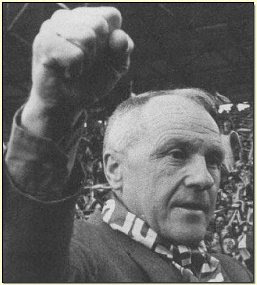 I’m a Liverpool fan so Shanks is always going to have a place in my heart but it goes beyond that.

You only need to watch him speak to get a sense of his honesty, charisma and contagious passion. Who wouldn’t run through a brick wall for such a man?

He insisted on positivity. He was a man of the people. As his statue outside Anfield simply says: He made the people happy.

He was also a socialist and his socialism was expressed in ways that anyone can understand:

“The socialism I believe in is everyone working for each other, everyone having a share of the rewards. It’s the way I see football, the way I see life.”

Shankly was a force of nature. I met him once before a Liverpool match at Anfield.

He was holding forth like Caesar, surrounded by a crowd of people hanging on his every word. This was in the Anfield car park just in front of the Main Stand.

I was only about 5 but I squeezed through the throng and came face to face with the great man.

“Hello Mr Shankly” I said. “Can I please shake your hand?”

I’ll always remember not just his response but the manner of his bearing as he gave it.

He acted like he was the one pleased to meet ME!

I was five and used to being spoken to like a 5 year old.

But Shanks acted like meeting me was the best thing to have happened to him all year. He spoke to me not like I was an equal, but like I was some sort of film star who he’d finally got the chance to meet.

He fixed me with a proud look, reached out his hand to clasp mine and rasped: “ayyyyye son!!”

We’ve never seen his like since. We never will.