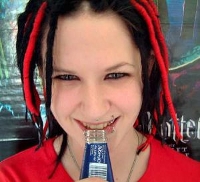 It’s one week away from the anniversary of the murder of Sophie Lancaster 3 years ago in Bacup, Lancashire.

You’ll probably remember the case. She was killed simply for looking different. Sophie liked to dress in goth gear.

A gang targeted her and her boyfriend Rob for the way they dressed. Sophie died as a result of the attack.

Her family and friends set up a wonderful foundation called The Sophie Lancaster Foundation that campaigns against prejudice, hatred and intolerance in all its forms .

I did a gig for them a couple of years ago with Attila The Stockbroker in Lancashire, and it inspired me to write a song for Sophie, and for all of us. It’s shown at the bottom of this post.

We police each other far too much. If ever anyone shows any individuality, we are too prone to ridicule and undermine. What happened to Sophie and Rob is an extreme example of it.

We should stop policing each other. When someone dresses in a way that stands them out from the crowd, let’s celebrate them.

They are championing our own ability to be who we are rather than be tramlined by supposed “acceptability”. By championing them in return we champion each other. We put ourselves on the side of freedom. We extend each other’s boundaries.

In a world seemingly driven on fear, let us stand on the side of those who reject conformity and permit all of us to simply be who we are.

Let us cheer on those who refuse to be too afraid to be themselves, and let us all find the courage to follow their inspirational lead.

This video was taken in Robb Johnson’s great little folk club in Hove near Brighton. It was quite dark but it’s the only recording I have of this song.

And make sure you check out the Sophie website to find out more.