Songwriters: How To Get Your Music Performed 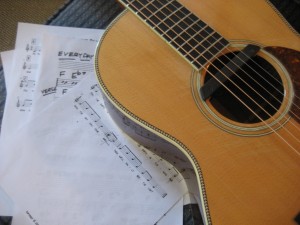 I started a new feature on my website recently called Ask Alun. It’s your platform to ask me whatever you like, with a promise that I’ll answer it.

Here is the question I got from Crispin, which I’m going to answer below. I think my answer will help other songwriters in Crispin’s position.

Alun, How would you suggest a writer gets material noticed? I write and record songs but am just not good enough to gig. I still want people to hear my songs though, so would love to have other performers sing my song. My question for you is how would you suggest I do this? Thanks – Crispin

The first thing I’ll say is that I’ve not been too strategic with this myself. Other people do sing my songs, and I’ll explain how that happened, but you’ll also see that it’s not a strategy so much.

Also, you’ll see that it’s happened because I perform my own songs, and I see you and many other songwriters don’t want to do that.

So I’m also going to give you a strategic plan of what I would do if I didn’t perform, so that the songs still had a life without the songwriter.

The idea of a song with a life that is independent from the songwriter is one that resonates with me. I’m not a performer who wants to be famous. In fact, I think that would be horrendous.

Yet I’d love my songs to be famous. Then I’d get quite a nice low level of recognition, but still be able to trundle around Aldi doing my shopping without being mobbed.

I’m now in a position where others sing my songs, and it’s the most flattering feeling in the world for a songwriter. It’s also fascinating to hear what others bring to the song and how they deliver and arrange it. It’s something I absolutely love.

The Manchester based duo Our Morals sing I Want Rosa To Stay. Red Leicester sing a few of mine. Liverpool Socialist Singers perform a few too. Nottingham based punk folk artist Paul Carbuncle does a great version of If Harry Don’t Go. Leeds singer Gary Kaye sings My Name Is Dessie Warren. And a high profile artist has committed to recording one of my songs for his forthcoming album.

So how did this happen? By accident is the truth. Well, kind of. I perform my music, and I record my music, and I share my music. So even without trying, just this act of ensuring music is heard leads to these opportunities happening.

If you’re a songwriter, it’s really important to have your songs recorded, on YouTube, on things like Soundcloud, and share them as much as you can. That’s a prerequisite. It stands to reason that if you’re the only one who hears your songs then nobody can find out about them.

But that’s just a prerequisite, it’s not really a plan.

And of course, many songwriters aren’t performers.

So I’m going to detail what I’d do if I didn’t perform to make sure that my songs were still heard.

But before I do, I want to poke about with that phrase in Crispin’s question that says “I am not good enough to gig.”

Maybe, like Crispin, the reason you’re not gigging isn’t because you don’t play an instrument or sing. It’s because you judge that you aren’t good enough.

I’m always reluctant to leave statements like that unchallenged. And here’s why.

The belief that we are not good enough is one of the most common limitations that people have. Let me tell you a story.

When I was 18, I was named the Merseyside Busker of the Year by the local media. There’s a lot of buskers in Liverpool, but they said I was the best. I’m not saying I agreed with them so I’m not telling you this to swagger and brag. I’m saying it because that’s one hell of a lot of validation that I was good enough, don’t you think?

Yet even with that approval, I discounted the value of that award. To me, I still wasn’t good enough. I didn’t start doing music properly until 17 years later. That’s not a typo by the way. It really was SEVENTEEN years later.

I didn’t think I’d be good enough. So I didn’t do it. I still feel a real deep upset about this. I wish I hadn’t started 17 years too late.

My story aside though, there is hard science that says that people who are brilliant think they are mediocre, while people who are only average at something think they rock! This science actually won the Nobel Prize and you can read more about it in my blog post Your Doubts Are Only A Sign Of Your Brilliance.

So I’ll challenge that statement. You’re not good enough to gig? Really? You see Crispin, I’ve heard your stuff on Soundcloud, and I thought it was really good. And it was you performing it. So despite what you’re saying – I’m not so sure.

I’d really advise you to get to some open mic nights. You’ll meet a ton of musicians there too, and they’ll become your pals. As you’ll see in a moment, that alone is pretty valuable.

For those songwriters who are glaring at me right now thinking “no, really, I can’t gig” then the next bit is for you. Here’s that plan I promised you.

Your goal is to get other bands and singers to be performing the song that you have written.

So the best thing you can do is to become somebody that all of your local music scene knows, and values, and regards with some “authority” and trust.

I’ll take you back to my story again now, as it is relevant.

As I started so late in life, I needed to start quickly. So I set up a music night. It wasn’t an open mic, it was a night of booked acts. We took a split of the door money.

I think this would help you too and here’s why.

1. You become insanely useful to the people you want to get to know.

You could go round cold calling musicians, sure. But you’re only scratching your own itch here, and besides who responds positively to a cold call?

Yet what do bands and singers want? Gigs! A stage to perform on. Set up a music night and here’s what you’ll find will happen.

You’re local music scene will be contacting you!

2. You’ll be the hub of your local music scene

The fact that you’re booking gigs will give you a certain authority amongst the local music scene. I don’t mean that in a uniform and funny hat way. More that you’re regarded as someone who is a player on the scene.

3. You’ll know everybody – and many will become your pals

So why is this important? Well, it gives you three things that you really need.

Firstly it gives you intelligence. No, not the IQ Test kind. The James Bond kind. You’ll be in a position to think of your songs, and be able to identify exactly which acts a particular song would be perfect for.

Secondly, you’ll get to know which acts are songwriters, which acts need songs, and which acts are a bit of a mix. Pitch a song to a writer like me and no matter how good it is, I’m unlikely to sing it. Why? Because my main reason for performing is to have MY songs heard. That’s my songs main opportunity to be out in the world. So you’ll need to know in the first place which acts are needing songs, as they’ll be really receptive to an approach.

Thirdly, because they are now your mates, or at least acquaintances who view you as someone with weight on the local scene, it is really easy to put a song their way and ask if they would be interested in adding it to their set.

Moreover, the fact that you now have the “scene intelligence” to carefully select a song tailored to a particular act, and  you know that act needs material, increases your chances of a YES many times over.

Now that you’re in touch with everyone – why not put the feelers out for songwriting collaborations?

This opens up possibilities to get your songs sung by those “off limit” acts who are prolific songwriters. Many songwriters love to collaborate. Of course, some of us are predominantly loners, but others love to join up.

This is a great way to start getting your songs performed because anything you write with a singer/songwriter will be a song that they’ll inevitably put in their set list.

Once your songs are being performed by acts on your music scene, ride the momentum. When you talk to other acts that you’re pitching ideas to, make sure they know that you wrote this song for that band.

It gives you a whole load of social proof, which is really important in calming people’s fear of the unknown and uncertain.

You’ll also get a halo effect from the act singing your song too. If they like that act, they’ll be impressed that you are writing songs for them, and it will make them even more receptive to you.

So that’s my advice.

1. Challenge the “I’m not good enough” stuff. It’s normally not true. You don’t need to be perfect and my guess is that you’re more than enough already.

2. Set up a music night where you book local acts to play it.

3. Use the knowledge you gain to filter which acts write and which don’t.

4. Carefully select songs to suit the style of those acts who don’t write, and pitch them. After all, you know them now.

5. Approach acts who write their own stuff, and suggest a collaboration. Expect people to say no, that’s normal. It’s not personal but some songwriters work alone. But you will get a yes. Just keep putting the question.

By the end of this, even if you’re not performing yourself, your songs will be getting performed by others.

Let’s know how it goes.

What Do You Think?

Well that’s my take on it. But I’m sure there are a ton of ideas out there.

Have you had songs sung by others? How did it happen?

How would you go about having others sing your songs if you didn’t perform yourself?

Have you ever sung someone else’s song that wasn’t famous? How did it happen?

Write your stories in the comments box below. I’d love to hear them.