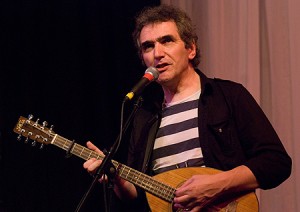 I’ll be supporting Jez Lowe at the Newhampton Arts Centre in Wolverhampton this weekend (Saturday 11th May 2013), with accompaniment from fiddler/mandolinist extraordinaire Gina Le Faux.

Singer/songwriter Jez is an enchanting performer with an engaging North-Eastern wit. His songs are mainly written in a traditional style, accompanied on guitar, cittern and harmonica.

Jez is often found accompanied by his band The Bad Pennies. He was nominated for the 2008 BBC Radio 2 Folk Awards Singer of the Year.

He has built an enviable reputation as a songwriter and performer in the world of acoustic sounds with more than a dozen albums and countless live performances around the world.

Also performing are Long Hankin, Harp & A Monkey, Roger Davies, and The Raven in a night which is part of the Folk 21 West Midlands Regional Day.