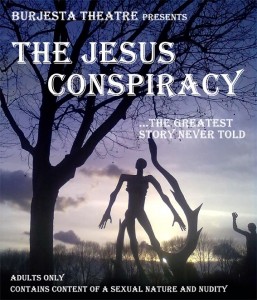 The last chance to see ‘The Jesus Conspiracy’ is this Friday and Saturday (19th and 20th April).

As you know I play Jesus’ brother James in a historic battle with Paul over the future of Christianity. But don’t listen to me, here’s what the Liverpool Echo had to say.

“Fantastical…it’s challenging, provocative theatre…serves up some thought-provoking ideas that linger long after the actors take their final bow. A fearless performance by Rachael Boothroyd as Mary Magdalene….strong performances from key figures, particularly for James, Jesus’ brother (Alun Parry) and Paul (made a strangely likeable schemer by Mike Leane)”.

There will also be a Q & A session regarding the history, politics and religion of the times after the shows with the writer and the co-director.