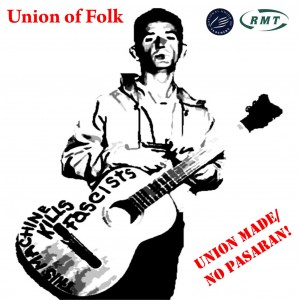 Monday 19th November sees the release of a project I’ve been collaborating on in secret called Union of Folk.

Union of Folk is a supergroup gathered together by radical Leeds singer Gary Kaye. We are releasing two songs on Monday, available as downloads on iTunes, Amazon downloads, and CD Baby.

The songs are Union Made (a rewrite of the Woody Guthrie classic) and No Pasaran. The two tracks will also be part of a compilation album available on Monday, and funds from the two tracks will go to the RMT and NUT hardship funds.

Union of Folk is a more than impressive lineup. So here it is.