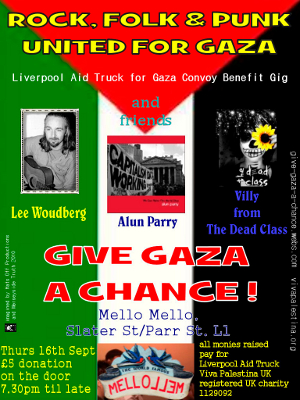 I will be playing a fundraising gig tomorrow (Thursday 16th Sept) to help raise awareness and monies for the Liverpool truck that is going on the next
Viva Palestine aid trip to Gaza.

The gig is at Mello Mello which is on the corner of Slater Street and Parr Street in Liverpool.

I’ll be playing for the first time with Tom Stabler on lead guitar. Tom is usually the front man with The Jackdaws. Come along and see our debut.

Also on the bill are Lee Woudberg, and Villy from the band The Dead Class, amongst others.

The night starts early at 7.30pm

Entry is £5 donation on door (all monies donated to the charity no. 1129092) in support of http://give-gaza-a-chance.webs.com

Also, while I’m on, a big cheer to Manchester Trades Council for organising a 200 strong fringe meeting yesterday at TUC Conference.

I was meant to play but as a lot of you know I had some minor surgery over the weekend and just didn’t quite recover in time. I’ll be fine for Thursday though, so see you there.