Your doubts are only a sign of your BRILLIANCE! 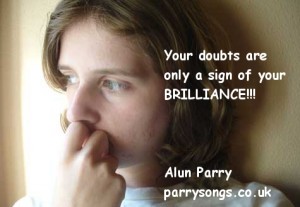 One thing that holds me back is self confidence. If I aim too high, or have too ambitious a thought, a voice inside me often scoffs: “Ha! Who the hell are you?”

There’s lots I’ve done in life. Some of it is so extraordinary that it doesn’t even feel like my life. Did I really do that? And that? And THAT?!! Yes I did. Yet I’m nagged by the sense that I could be doing so much more, that I’m not fulfilling my potential.

The nag is because I know that I am not aiming high enough. I rule myself out of things even though the facts will tell me I’m more than able.

But there is doubt.

I speak to others, including real high achievers, and they tell me the same. They carry self doubt everywhere. The more successful they are, the more exposed they feel. Their supposed fraud has now become bigger and surely soon they’ll be found out.

I spoke to a successful businesswoman very recently. She mentioned being at a conference, selling what she does to others in the business world, and an astonished voice in her head said: “Oooh look, they think I’m proper!!”

Even John Lennon said that at times he felt like a complete fraud. Yes, John Lennon. The Beatle! Even HE felt it.

So I’d taken it for granted that this was pretty normal. It was part of the human condition. It got in the way sometimes, but it gets in everybody’s way.

Except, now I know that it’s not normal. And it’s all thanks to an event I spoke at last Thursday.

I was giving a talk on a psychotherapy concept called the drama triangle, and how it affects human relationships.

Yet it was another talk on the same evening that made me realise that doubt is not commonplace at all.

Let me tell you more by sharing what I learned about something called the Dunning-Kruger Effect.

It’s named after the academics David Dunning and Justin Kruger of Cornell University.

They discovered two things from their research.

The first is that incompetent people over estimate how good they are. They think they’re fabulous, but in fact they’re nowhere near as skilled as they think. In fact, they will overlook just how extreme their incompetence is.

Think of that guy on X Factor every year. He tells the cameras he’s the next big thing. He’s cocky, self assured, utterly confident in how awesome he is. And then he sings. Aaaaghhh!

Their second finding is that competent people under estimate how good they are. Even though they’re extremely skilled, they think they’re average.

So why is this? It’s because those who found the tests easy assumed that everyone else did too.

This shouldn’t come as a big shock to me as I see it lots when I coach people. People have skills and they don’t even know it. They think everyone has those skills, but of course they don’t.

So high achievers fail to recognise their talents as they think that others must be equally good.

This brought me to an amazing conclusion. Your doubts are only a sign of your brilliance.

So every time you deny yourself because you have doubts, remember the Dunning Kruger effect. Remember that if you were incompetent, you wouldn’t be having these doubts at all.

The fact that you have doubt is a psychologically proven indicator that you are highly skilled. And it’s the very height of your powers that is causing you to doubt yourself in the first place.

Next time the doubt bug bites, see it for what it is. A sign that you are BRILLIANT!