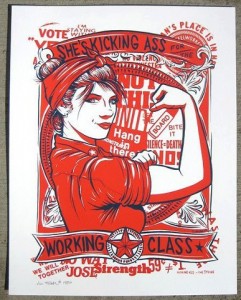 It’s International Women’s Day today, so I thought I’d share some thoughts and a song.

Did you know that, once upon a time, we took our mother’s surname rather than our father’s? So my name is Parry, but in days gone by it wouldn’t be.

This was in a time where there was no such thing as property. Humans consumed what they had caught and then had nothing again. Issues like inheritance were not an issue, and people would mate freely with everybody else in the tribe.

As humans became smarter, we learned how to farm. So once we’d eaten what we needed, there was stuff left over. Property!

Men became upset that their property was passing down the maternal line potentially to other men’s children. The result is that the line was switched from mother to father. Engels called it “the historic defeat of the female gender.”

But how do you know for sure who the father is? Well, you can’t for certain. But the next best thing is removing sexual freedoms from the woman, and policing her sexuality with a ruthlessness.

Women, as Engels put it, are reduced to being a mere “transmission belt for property.”

So when Johnny plays the field, he gets admired and a slap on the back. What a guy!

I wanted to put all this into a song, so people who’ve never read Engels still had these ideas.

So people could see that the way we arrange ourselves today, whether that be personally, politically or economically, is not due to “nature”. It’s just down to property relations and is no more “natural” than anything else we might come up with.

And most of all, know that when you call a woman a slag that you limit us all, women and men, who want a world free of oppression.

So here is the song. I hope you like it.