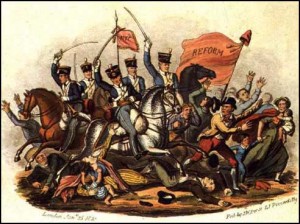 This Sunday I’ll be playing a gig to commemorate the Peterloo Massacre 190 years ago.

The massacre happened on 16 August 1819 in St Peter’s Field in Manchester.

At least 60,000 people had gathered at a meeting to demand reform of parliamentary representation.

They were charged by the cavalry with sabres drawn.

The gig starts at 7pm and takes place at the Briton’s Protection pub on Great Bridgewater St (M1 5LE).

As well as myself it features the excellent singer songwriter Claire Mooney, Manchester poet Dave Puller, and the Sargasso Township Jazz Band.